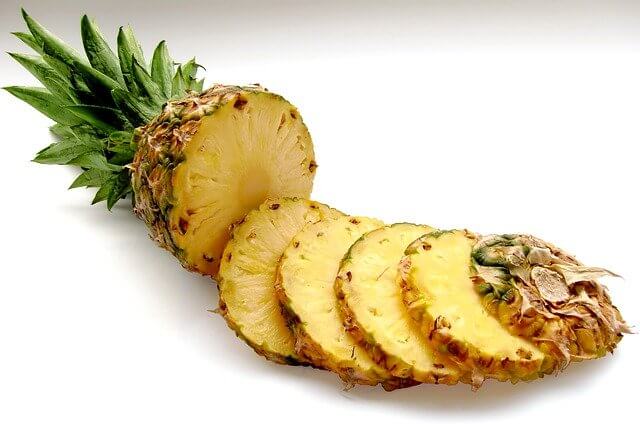 Pineapple and diabetes fruits such as pineapple are the best healthy choice for people that has diabetes, most diabetic patients shy away from pineapple because of the effect on blood sugar which is presumed.

Most fruit has a low glycemic index (GI) scores which means they impact blood sugar levels less than other food.

These scores tend to be low because fruit contains fructose and fiber, which help the body digest more slowly, leading to more stable blood sugar levels over time.

Pineapple is a good source of vitamin C and manganese, it also contains fiber, vitamin A and vitamin B as well as a compound called bromelain. These are the factors that make pineapple a healthy addition to a diabetes diet.

Pineapple has a glycemic index of 59 and also high in sugars (carbohydrates) but due to pineapples being on the average 86% water, it also has a standard 120-gram serving size 6 which is low.

Fresh pineapple is safe and recommendable for diabetics and those at risk of developing diabetes to eat due to its fiber content and low glycemic load, a protein-digesting enzyme found in the fruit and stem of pineapples, known as “bromelain” which exhibits anti-cancer and anti-diabetic properties in order to improve health.

A proper serving fruit for someone with diabetes contains no more than 15 grams of Carbs. It’s possible to eat any fruit as long as you count your Carbs. One cup of pineapple equals 15 grams of carbs which is the same as a half cup of unsweetened apple juice.

Pineapple differs, there are some pineapples that are super ripe, the GI is higher because the ripening process increases natural sugars. It may not make a huge difference in how it affects your blood sugar as compared to a not so ripe one, but it’s something to consider.

Type 2 diabetes is a lifelong disease that keeps your body from using insulin the way it should, people with type 2 insulin are said to have insulin resistance.

It is those who are middle-aged or older are most likely to get this kind of diabetes, so it used to be called adult-onset diabetes. It is best advisable to treat diabetes earlier before it gets to Type 2 diabetes.

Type 2 diabetes also affects young children mainly because of childhood obesity. It is the most common type of diabetes.

* Areas of darkened skin, usually in the armpit and neck

Insulin is a naturally occurring hormone. The pancreas produces it and releases it when you eat, insulin helps to transport glucose from your bloodstream to cells throughout your body, where it is used for energy.

If you have a type 2 diabetes, your body becomes resistant to insulin, your body is no longer using the hormone efficiently which causes your pancreas to work harder and make more insulin.

Over time, this can damage cells in the pancreas and eventually result in the inability of the pancreas to produce any insulin. A cup of pineapple juice has about 70% of the daily dosage of manganese required which is why it is advisable for adults, elders and the younger ones to eat a few chunks of pineapple a day to keep the body strong.

A diabetic patient can eat fruit but need to limit the intake since it will variable contain Carbohydrates. Carbohydrate is the macronutrient that impacts blood sugar most. The amount of one can vary from one fruit to the next with some “less sweet” fruits having more Carbs than the sweeter ones.

However, pineapple is a fat-free food rich in fiber and vitamins. Fiber is especially important to diabetics as it can help to lower blood sugar, reduce cholesterol, and regulate the bowel. a single, one cup of serving fresh pineapple has an impressive 2.2 grams of fiber with only 78 calories.

Fresh or frozen pineapple is the best for diabetes patients because it contains the lowest amount of carbs per serving. Pineapple juice and dried pineapple often contain more sugar which means their serving sizes are smaller for those managing their carbs.

The most healthful options are raw and frozen pineapple. Canned, Cupped, or processed pineapple often contain added sugar, especially when the fruit is in syrup.

To limit the impact on blood sugar levels, eat pineapple in moderation and pair it with protein or healthful fat to minimize the total Glycemic Index (GI) value of the meal.

Foods that have a low Glycemic index (GI) and Glycemic Load (GL) are the best for controlling blood sugar levels.

The glycemic index measures how quickly carbs in a specific food raise blood sugar while Glycemic Load takes into account how quickly a food makes glucose enter the bloodstream and how glucose per serving it can be delivered.

HOW MUCH OF A PINEAPPLE CAN A DIABETIC HAVE?

A diabetic patient ought to eat fruit that contains no more than 15 grams of carbs and one cup of pineapple equals 15grams of carbs which is the same as a half cup of unsweetened pineapple juice.

People with diabetes can make use of a wide variety of fruits into their meal plans and enjoy the various health benefits that come with it. Each fruit contains its vitamin and nutrient profile.

Doctors recommend that people eat whole fruits rather than juice because a piece of fruit tends to be more filling and have a lower GI score, whole fruits are more healthful sources of fiber, vitamins, and minerals.