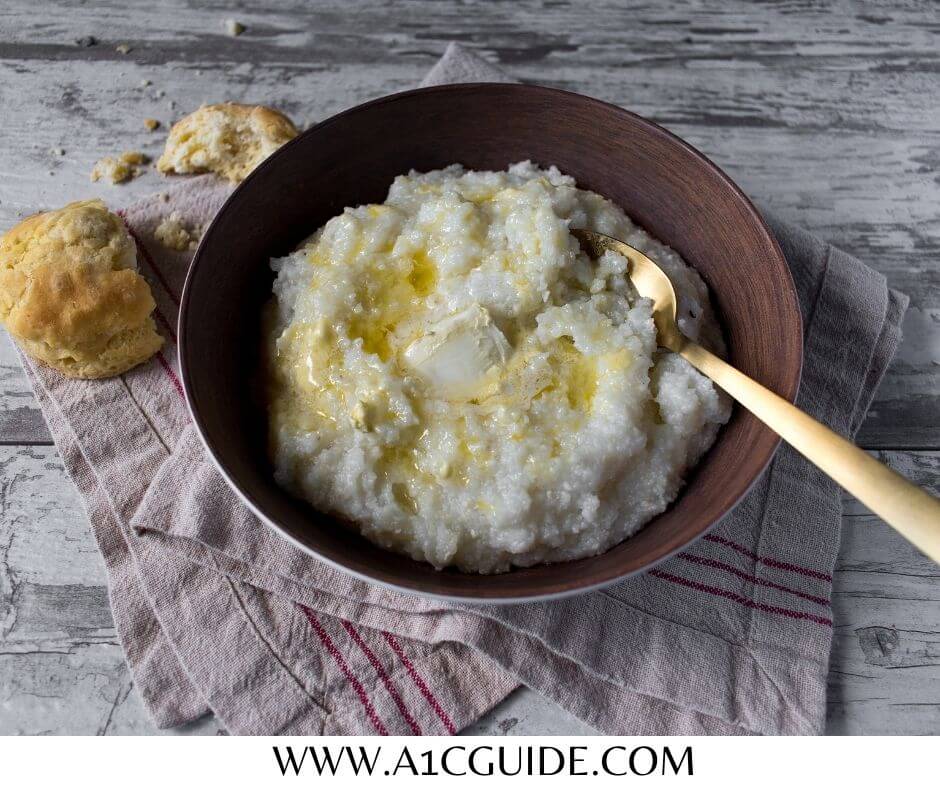 For starters, grits are a type of cereal that is native to South America, and people across the globe savour it now. Corn is one of the main ingredient used in making grits.

Grits are high on carbohydrates since its main ingredient is corn, and it is full of them.

Like other cereals and grains, apart from a high carbohydrate content, grits are low in fibers, proteins, and fats. In other words, the content of carbohydrates present in grits outweighs the fiber, protein, and fat content.

My answer would be a YES and NO. It might sound too vague and confusing but let me explain why.

As a safety norm, all the people who have diabetes should pay special attention to their diets and eat only those food items which cause no or minimal fluctuation in their blood sugar levels. Grits can cause a lot of ups and downs in blood sugar levels.

Grits contain volumes of carbohydrates that break down into sugar and increase the blood sugar levels. You may argue that grits also contain vitamins and minerals that are useful for the body.

I agree grits contain a bunch of vitamins like Vitamin B6, folate, riboflavin, thiamine, niacin, and minerals like phosphorous, magnesium, and zinc. But when you compare this with the proportion of carbohydrates, grits cause more harm to your body than benefits if you have diabetes.

Some people say that a person having diabetes should eat grits in moderation. This idea is correct but, if you ask my opinion, I would suggest why not avoid something that has good chances of affecting your health.

You should keep in mind that if you want to eat grits, have it occasionally and not as a part of your daily diet.

One study shows that the method used in processing grits contributes to how grits will affect your blood sugar. Grits are processed either by the quick, hominy, or grounding methods.

Of all the three, stone-ground grits prove to be the best for people with diabetes as they also contain more fiber than grits processed by the other two methods.

Although the benefits of grits are negligible, regularly eating grits does have some disadvantages if you have diabetes.

Some FAQs About Grits And Diabetes

Grits may or may not be an ideal food item for you if you have diabetes. These frequently asked questions can help reduce your doubts and queries about grits and diabetes–

Are Grits Healthy for Diabetics?

No. People are of varying opinions on this question. But if you ask me, I would say that grits are not a healthy food option if you have diabetes.

Grits come from corn, which contains a large proportion of carbohydrates which breaks down into sugar during assimilation. Having grits can lead to an increase in blood sugar levels.

Do Grits Raise Your Blood Sugar?

Are Grits OK for Type 2 Diabetes?

Grits can increase the blood sugar level massively, and so a diabetic person should avoid it as far as possible. However, if you feel like having grits, you can have it as an occasional treat, only after consulting with your doctor or dietician.

Which is Better Yellow Or White Grits?

If you have diabetes, it is usually best to avoid food items that can elevate your blood sugar level. Grits, in general, have a lot of carbohydrates in them.

Are Yellow Grits Good for Diabetics?

The type of corn used in preparing grits determines their color. Yellow and white, both, are high on carbohydrates and must be avoided.

Yellow grits are said to be sweeter than white grits.

Can Diabetics Eat Shrimp and Grits?

Very often, I come across queries such as ‘Are shrimp and grits diabetes-friendly?’

Shrimps can be beneficial for people with diabetes, but at the same time, grits can prove harmful to them. However, you may have shrimp and grits but in moderation and as occasional treats.

What Vegetables Go With Shrimp and Grits?

It is necessary to know what you are adding to your plate when you have diabetes. A person having diabetes should not include any food items that can directly or indirectly elevate their blood sugar.

While selecting vegetables to go along with shrimp and grits, it is mandatory to choose vegetables with a low glycemic index. Some of these are tomatoes, bell peppers, butternut squash, and zucchini.

What Is The Glycemic Index of Grits?

The glycemic index of grits varies depending on the type of corn flour used in making it.

Grits are one of the food items that should be avoided by someone with diabetes. It is mainly because of the less nutritional value it can provide to them.

Grits are a rich source of carbohydrates that is not good for people with diabetes as this can cause a massive increase in their blood sugar level.

Some believe that a diabetic person can eat grits in moderation. However, it is best to avoid it and only ask a doctor or dietician before including it in your diabetes diet.