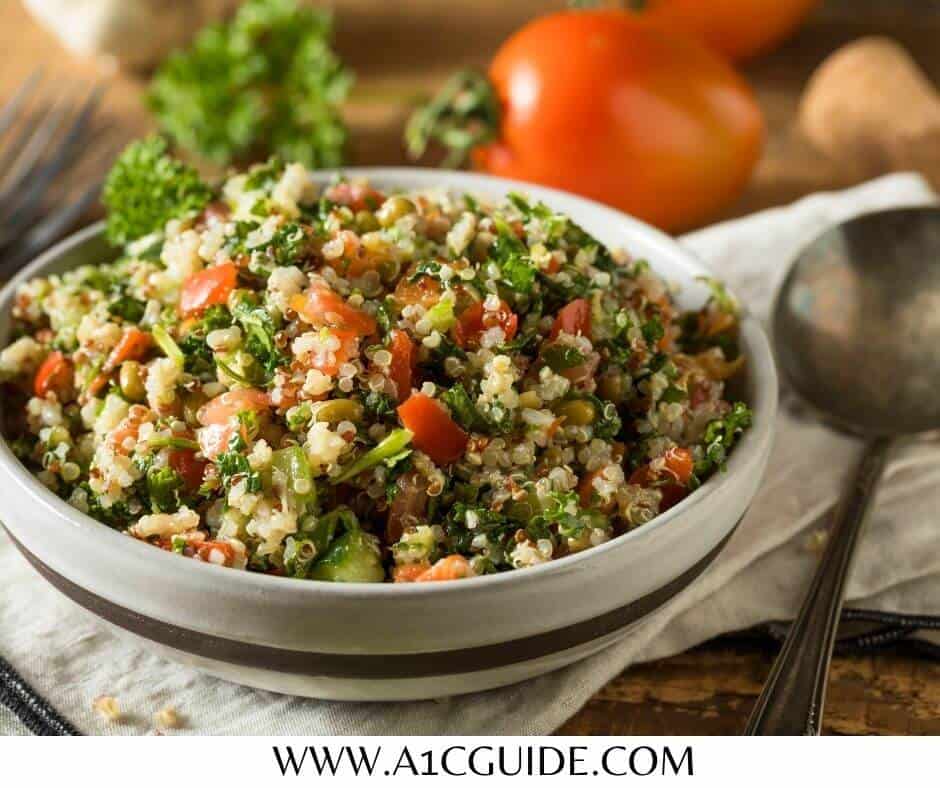 Often mispronounced, quinoa (pronounced as keen-wah) is a popular whole grain eaten as food across many countries. When compared to other food grains, quinoa contains more proteins, fibers, minerals, and antioxidants.

Quinoa is also gluten-free and helps people with diabetes to maintain their blood sugar.

Preparing quinoa is similar to preparing rice. Just like rice, quinoa needs to be mixed with water, then boil it and stir it- the quinoa gets ready within 10-15 minutes, where it becomes fluffy.

Is Quinoa Good for Diabetics?

Yes, quinoa is better than other whole grains as it contains more proteins, fibers, minerals, and antioxidants.

Quinoa has a good amount of protein and fiber content. Eating it does not make you hungry frequently. Quinoa is also known to lower blood pressure and cholesterol levels.

4 Benefits of Quinoa for Diabetes

Quinoa is one of the ideal food items to include in your diet if you want to maintain your diabetes. The following are the quinoa benefits for diabetes-

Some FAQs about Quinoa and Diabetes

By now, you might be well aware of all quinoa benefits for diabetes, yet it is not uncommon for a few questions to come to you while you are reading all the information off the internet. I am listing below a few for your convenience-

What is the glycemic load of quinoa?

The glycemic index, more colloquially known as glycemic load, of quinoa, is 53.

Does quinoa have a high glycemic index?

Is quinoa lower in carbs than rice?

Quinoa can be compared with white rice and brown rice to know what food item is better and deserves to be included in a diabetes diet.

White rice has more calories and carbohydrates than quinoa. If you take a cup of quinoa along with a cup of white rice, white rice can have almost 15 times more carbs than that of quinoa.

On the other hand, brown rice has similar content of calories and nutrients and lower carbohydrates than quinoa.

Yes, that makes quinoa the food with lower carbohydrates than white rice and food with slightly more carbs than brown rice.

Is brown rice or quinoa better for diabetes?

Quinoa is a healthy addition to a diabetes diet.

The whole-grain contains an adequate amount of carbohydrates necessary for the human body to function, a good deal of proteins, fibers, and a host of other minerals and antioxidants.

Magnesium, a vital mineral required by the body to control blood sugar levels, is present in quinoa in adequate quantities.

The Glycemic index of quinoa is 53, and it falls into the category of low glycemic foods. Therefore, even if you eat quinoa daily, you would not notice a dramatic spike in your blood sugar level.

Quinoa is gluten-free. Quinoa is also much better than other food grains because it contains more proteins, fibers, minerals, and antioxidants than them, except for brown rice.

Although brown rice is slightly better than quinoa for people with Type 2 diabetes, it is much better than white rice.

By a slight margin, Brown rice can be better than quinoa when you compare the carbohydrate content. However, quinoa contains more proteins than brown rice. The calorie content and nutrient content of both- brown rice and quinoa are more or less similar.

So, it would be in the best interest of a person with diabetes to switch over from white rice to either quinoa or brown rice.